July 4th weekend!  Woohoo!!!!! Scanning over my journey on the road since last August, there have been numerous places I've loved visiting.  Amongst my favorites is Ojai in southern CA and on up the central coast from San Luis Obispo to Santa Cruz.

As of this weekend, I am majorly smitten with Port Townsend, Washington, one of only three victorian seaports in the nation, located on the northeast tip of the  Olympic Peninsula.

"A beautiful city of authentic charm with maritime heritage and a touch of urban chic."
"Dubbed the Paris of the Pacific Northwest."
"Named one of the Top 10 Coolest Small Towns in America."


Growing up on the east coast in a sea village town, I feel most at home when breathing sea-scented air,  nurtured and nourished by flora and fauna. This place rocks my soul! 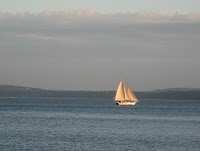 In Port Townsend, many Victorian buildings remain from its late 19th-century heyday, numerous annual cultural events abound and it is a maritime center and mecca for independent boat builders and enthusiasts.  Arts and cultural centers and numerous organic food options, a great food coop and cafes are dotted about town. A high percentage of the folks that flock to PT are my age. This quaint town is laid back and friendly. It's all about loving and caring for this amazing gift called earth, resonant kinship and outdoor adventure here.... riding bikes, sailboats, hiking and more. 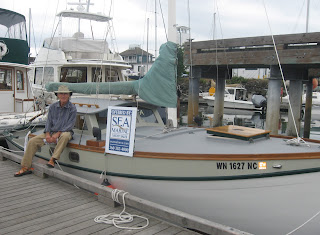 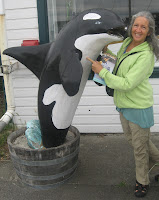 ~ When you're in the right place at the right time,
opportunity opens up like magic ~ 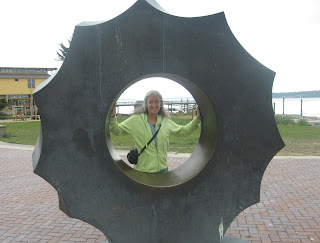 My deep connection with mermaids and seaweed blended with Ran's connection with sailing has landed us in seafaring paradise.  We're walking about Port Townsend in total bliss. Spotted a bike shop and test mounted some Townees. That was only the beginning as we continued to connect with local resident business owners and establishments that intuitively called our attention .... referring to that magic again. We found the best pizza ever and our favorite cafes serving the best coffee, the 'biggest' and  'bestest' homemade pies and the best salmon chowder anywhere! 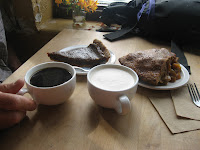 A few blocks away, came upon a store window that had my name written all over it:  The Writers' Workshoppe.  Owner, Anna, & I had a wonderful exchange around the subject of writing and publishing. A couple doors down the way was a music shop that's making a big resurgence in selling albums.  Not a CD in the store.  What do you think of that?  A couple stores down for that a Native American craft shop owned by a Lakota brother.  He shared some of his family stories about growing up in South Dakota with Ran & I.  What a blessing.  A few streets over, we discovered another cafe (a multitude to chose from) and it turns out that the woman working there moved from Alaska the very same day Ran did after a record snowfall when they both hit the wall after many years of living there and said..... That's it! We're out of here!  Some say it's a small world... I say its a connected world.  I suppose that's one of the reasons why I refer to myself  as Rainbow Connector.

All of these connections were totally amazing, and I've shared this for last. Judy Courtwright, Artist of Watercolor & Clay. Of all visual art mediums, it just so happens that these two visual art mediums attract me the strongest. This is how I met Judy.  Only 15 minutes before I passed by a window displaying a few of her framed watercolors, it was her bio page in a notebook next to them that caught my eye.  Her bio showed a photo of her joy-filled face and words that explained briefly her passion of painting.  I was immediately drawn like a hummingbird to sweet nectar and proceeded to descend the stairs to her studio.  There is much I could say, although the essence of our meeting was purely delightful. Oh yes, I must mentioned that during my conversation with Judy, she mentioned that she had put her bio that I was attracted to in the storefront window just 15 minutes before I passed by.  I love how life's moments evolve and unfold in perfect divine timing.

Judy, thank you again for the inspiration, encouragement, and complimentary mini introduction into the world of watercolor.

Check out Judy's paintings at: www.judycourtwright.com

****What a glorious introduction to Port Townsend!***
Resonant connection after resonant connection welcomed us
A purely spectacular 4th of July!
Here's to celebrating the independence of
following one glorious moment to the next!

Late afternoon had arrived, and it was time for Ran & I to move on.  Next September we intend to come back to Port Townsend for the annual Wooden Boat Festival.  CANT' WAIT!!!!

Back in Ran's White Rhino, we headed to the nearby town of Poulsbo to join Jim (Ran's climbing partner from year's back), wife Mary and son Cam for dinner.  What a perfect closure to a magnificent day. 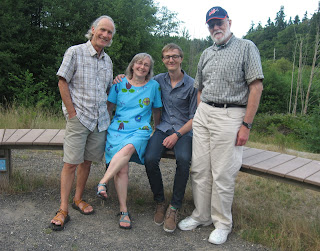 What an INCREDIBLE dinner visit ~ thank YOU again!